When was the last time you received a 911 dispatch call while riding a rollercoaster? Once? Twice? Never? If you are the proud owner of an Apple iPhone 14, sit back, and fasten in because you’re in for a wild ride.

When was the last time you received a 911 dispatch call while riding a rollercoaster? Once? Twice? Never? If you are the proud owner of an Apple iPhone 14, sit back, and fasten in because you’re in for a wild ride.

It seems as though the new crash detection feature is sending out continuous false alarms when there’s no accident. That doom-and-gloom feature is making national headlines. In today’s video, Jon Fausz, Director of Operations with 4BIS, fills you in on the latest news. 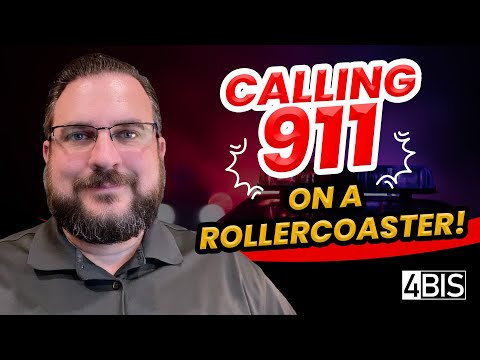 What Is The Apple iPhone 14 Crash Detection Feature?

Those sensors will detect sudden or unexpected changes in pressure and motion. That means the updated accelerometer inside the device is calculating G-Force measurements. That and other data types from the iPhone 14 or Apple Watch will trigger an immediate alert.

The crash detection system does attempt to make calls to the local 911 operators and emergency services. Also, to enhance the feature where there is no mobile network, iPhone customers can expect it to come to Apple’s upcoming satellite service soon.

How Does Crash Detection Work On The iPhone 14?

Your Apple iPhone 14 or Apple Watch ‘Crash Detection’ feature requires a cellular connection or Wi-Fi with an active internet connection. Neither device can make emergency service calls on your behalf without an available connection.

The feature’s design detects what is presumably a severe vehicle crash. That incident might be a rollover, rear-end collision, to front or side impact damage. According to Apple, that applies to consumer-type vehicles like cars, trucks, SUVs, and minivans.

If there is a severe vehicle crash, the Apple device will immediately display the alert on the device’s screen, and you will hear an alarm. If you can’t see the screen for any reason, the iPhone will read the alert audibly for you to hear.

If you have an iPhone 14, your smartphone’s screen will show the ‘Emergency Call’ slider. When you see that, slide it, and your device will immediately call local emergency services.

If you have an Apple Watch, that device makes a noise and will start tapping your wrist. As you look at the device, you will see a message on the screen and the ‘Emergency Call’ slider. Like the iPhone 14, slide it to activate emergency service calls.

Some users have the iPhone 14 and Apple Watch on them at all times. Suppose there is a vehicle crash, and both devices are present. In that case, the smartwatch receives the Emergency Call by default because it is attached to the person and more accessible during an emergency.

Once the alert gets sent to your device(s), you have precisely 10 seconds to respond by calling or canceling the initial notification. If you do not respond during that timeline, one more 10-second countdown begins. If there is still no response from you after 20 seconds, either device immediately calls emergency services for help.

How To Turn Crash Detection On or Off

Depending on the situation or event you’re going to, you may need to turn the ‘Crash Detection’ feature off to avoid initiating an accidental emergency service call. In that case, it’s easy to do.

Apple’s instructions are straightforward when turning your feature on or off.

Go into your Settings

Next, go into Emergency SOS

Then at the bottom of the settings, under Crash Detection. Slide or click the button on the right side of your screen. That turns on or off the ‘Call After Severe Crash’ feature.

As a reminder, Crash Detection, by default, is automatically on unless you manually turn it off in your settings. Finally, if you have any third-party apps registered to your devices that can detect crashes. In that case, you can expect them to activate an emergency service call.

Please note the Crash Detection feature is only available on the ‌iPhone 14 and Pro‌ and Apple Watch SE, Series 8, and Ultra.

At 4BIS, we encourage you to stay safe and take full advantage of all the features on your Apple devices. As Jon Fausz mentioned in his video, you do have several options if you do not want to turn the Crash Detection feature off on your iPhone 14.

Suppose you’re going to enjoy a ride on a roller coaster. If you can and are willing, leave your device in your vehicle, hand it to someone not going on the ride, or turn it off. Remember, Apple’s emergency call feature may activate due to the G-Force from the ride.

When was the last time you received a 911 dispatch call while riding a rollercoaster? Once? Twice? Never? If you are the proud owner of an Apple iPhone 14, sit back, and fasten in because you’re in for a wild ride.
Read More
-->
December 10, 2021 in Blog

What Your Business Needs to Know About Protecting Customer Data

What Your Business Needs to Know About Protecting Customer Data Key Points: The Federal Trade Commission (FTC) sets standards for safeguarding customer information. The Safeguards Rule took effect in 2003 but was amended in 2021 after public comment to ensure...
Read More
-->
December 10, 2021 in Blog

All You Need to Know About Azure AD

All You Need to Know About Azure AD Key Points What is Azure AD? What are the outstanding features of Azure AD? Who uses Azure AD? How does one set up a backup Azure AD connect server? What are Azure...
Read More
-->
December 10, 2021 in Blog

How Safe is Microsoft Teams?

How Safe is Microsoft Teams? Understanding the New Vulnerability Vectra Uncovered Key Points in This Article Cybersecurity researchers at Vectra recently unearthed a new vulnerability in Microsoft Teams that may allow cyber criminals the means to cause considerable harm. The...
Read More
-->
December 10, 2021 in Blog

Check fraud is incredibly widespread. Unfortunately, because there are several different types of check fraud, no one knows the exact number of people and businesses affected or the total losses victims incur.
Read More
-->